Did you ever watch a TV show, or see a movie, or read a book, and think: whoever wrote that knows about my life? (I wish I could say that about Girls, but alas, not so much these days.)

Well, that was essentially my experience at a recent staged reading of Anna Fishbeyn's play, Sex in Mommyville. Despite the headline-grabbing title, the play isn't (only) about sex. It's about an under-appreciated writer and mother (Artemis), who struggles with her own intellectual, feminist identity while wrestling with the demands of her family: an over-worked husband (Zeus), two exhausting kids, and overbearing parents. It also happens to be laugh-out-loud funny. 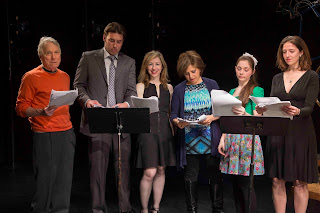 I was delighted to realize how much Artemis and I had in common: advanced, under-utilized degrees in literature, novels under the proverbial bed, successful husbands whom we love but sometimes seem to have grown Blackberry tumors on the tips of their fingers. (The similarity ended with her insatiable randiness, it must be said.)

The play is autobiographical fiction: similar to the story of the playwright's life, but with significant changes of her choosing (an age-old genre, really). And it is very brave. Like some of the very best humorists and essayists, Fishbeyn is not afraid to mine her own life, and the lives of her family members, for humor and pathos (think: Nora Ephron or David Sedaris).

While the struggle of the mother at the center of a busy family might have been generic--an everywoman--Artemis is not every woman. She is frisky, not cold. She is intellectual, staying up all night reading philosophy, not watching Real Housewives. She has Russian immigrant parents, whom she loves even though they take her husband's side and let themselves into her apartment at exactly the wrong times.

A lot has been said about the gulf between feminist ambition and the reality of motherhood, and this play adds a whole new thread to that discussion. For writers and artists who can't or don't escape the home to an office, finding balance and maintaining ambition can be herculean tasks.

Sex in Mommyville is currently in pre-production, and hopes to come to an Off-Broadway theater soon. Here's hoping lots of other mommies (and daddies) get to see it.
Posted by rach at 10:11 PM

Thank you for your comments!

Promote Your Page Too

This blog is a place to reflect on what it means to become a parent. The highs and lows of pregnancy, the messiness and ecstasy of birth, and the chaos of new parenthood encompass a magical, fleeting time. As for the journey beyond, there will be words about that, too; I'm still living it. And as for the (Jewish) part, well hey, that's me.